Home buyers and homeowners may be getting spooked by higher mortgage rates. Mortgage applications for both home purchases and refinancings plummeted 6.6 percent last week on a seasonally adjusted basis compared to the previous week, the Mortgage Bankers Association reported Wednesday. 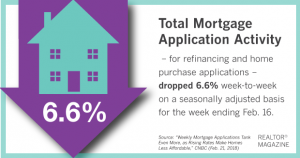 Volume is now just 3.5 percent higher than a year ago, with annual increases continuing to shrink week to week.
Applications to refinance dropped 7 percent last week but are still 2.8 percent higher than a year ago. Applications to purchase a home dropped 6 percent last week and are 3 percent higher than a year ago.
Affordability is weakening as home prices continue to rise. Mortgage rates also are now more than half a percentage point higher than at the start of the year.
“The drumbeat continues,” says Mike Fratantoni, the MBA’s chief economist. “Inflation is increasing, as are deficits, and the economy and job market continue to look strong, and rates are higher as a result. This upward move in rates is coming right at the start of the spring buying season and is a headwind.”
The 30-year fixed-rate mortgage averaged 4.64 percent last week, the highest level since January 2014, the MBA reports.
More borrowers are turning to adjustable-rate mortgages, which tend to have lower initial rates than the 30-year fixed-rate mortgage. However, the lower rates from an ARM can be risky since the rates are locked in for a shorter term. ARM applications rose to 6.4 percent of total applications last week.