What Buyers Will Give Up for Walkability

Living in areas that are close to shops and restaurants is becoming increasingly attractive for both young and older generations, according to the 2017 National Community and Transportation Preference Survey conducted by American Strategies and Meyers Research on behalf of the National Association of REALTORS®. Researchers polled 3,000 adults from across the United States to find out what they are looking for in a community.
Fifty-three percent of Americans say they prefer to live in a community with homes that have smaller yards but are within easy walking distance of the community’s amenities (rather than homes with large yards where residents have to drive to amenities) according to the survey.
Certain generations show even more fondness for living near amenities. Sixty-two percent of millennials and 55 percent of the silent generation (those born before 1944) say they prefer walkable communities and short commutes, even if it means living in an apartment or townhouse. Meanwhile, Generation X members and baby boomers show a strong preference for the suburbs; 55 percent of them told researchers they have no problem with a longer commute and driving to amenities as long as they can live in a single-family, detached house.
“REALTORS® understand that when people buy a home, they are not just looking at the house; they are looking at the neighborhood and the community,” says NAR President Elizabeth Mendenhall. “While the idea of the ‘perfect neighborhood’ is different for every homeowner, more Americans are expressing a desire to live in communities with access to public transit, shorter commutes, and greater walkability. REALTORS® work tirelessly at improving their communities through smart growth initiatives that help transform public spaces into these walkable community centers.”
Learn how members are transforming town centers with creative reuse, smart growth initiatives, and project funds from NAR.
Women tend to prioritize walkability and public transit more than men, according to the survey. Fifty-four percent of women surveyed said that sidewalks and places to take walks are very important to them when deciding where to live. Thirty-nine percent also said having public transit nearby was important.
Overall, 60 percent of the 3,000 adults surveyed live in a detached, single-family homes. But of those 60 percent, 21 percent said they would rather live in an attached home that offered greater walkability. Sixty percent of those surveyed also said they’d be willing to pay more to live within walking distance of parks, restaurants, and shops. Further, 80 percent of respondents said that sidewalks are a positive factor when purchasing a home. 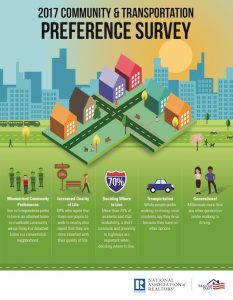