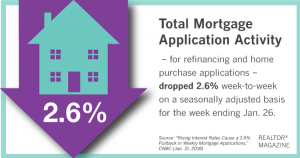 Broken out, applications to refinance a home loan dropped 3 percent during the week, but are still 3 percent higher than a year ago. Refinancing applications tend to be more sensitive to rate changes than home buying applications. Applications to buy a home also dropped 3 percent last week, but remain 10 percent higher than a year ago.
The MBA reported that the average 30-year fixed-rate mortgage rate was 4.41 percent last week, the highest level since March. The 15-year fixed rate and the FHA rate were at their highest levels since 2011 and 2013, respectively.