Did Buyers Just Miss Their Final Chance for Low Rates? 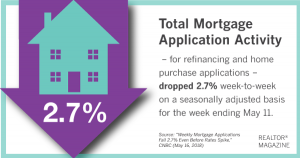 The 30-year fixed-rate mortgage dropped to 4.77 percent last week, the MBA reports. But on Tuesday, interest rates jumped to a seven-year high, following a major sell-off in the bond market, CNBC reports. The average 30-year fixed-rate averaged 4.875 percent for the highest creditworthy borrowers and 5 percent for the average borrower, according to Mortgage News Daily.
More buyers are turning to adjustable-rate mortgages, which offer lower introductory rates for a set period before rising. But ARMs are on the rise too. “Jumbo and 5/1 ARM rates increased, with the 5/1 ARM rate increasing to its highest in our survey at 4.09 percent,” says Joel Kan, an MBA economist.
“Homebuyer demand has remained positive and shaken off the higher rate environment so far this year,” says Sam Khater, Freddie Mac’s chief economist. “However, after years of very low mortgage rates, the symbolic risk of a 5 percent mortgage, on top of higher gas prices, may cause a slowdown in homebuyer demand, particularly in western states and exurbs that are affected more by gas prices than the typical consumer.”