Mortgage applications for refinancings and home purchases surged 4.1 percent last week on a seasonally adjusted basis, even as interest rates rose, the Mortgage Bankers Association reported Wednesday. Volume is now up 5.6 percent over a year ago. 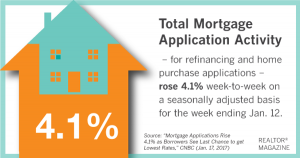 More consumers are growing concerned that the long run of record low rates may be coming to an end. As such, they’re rushing to lock in rates before any more upticks.
Applications to purchase a home increased 3 percent last week and are now 7 percent higher than the same week a year ago. Refinance applications rose 4 percent last week. Typically, refinance applications drop when interest rates rise so applications diverted from normal patterns last week.
The MBA reports that the average 30-year fixed-rate mortgage rose last week to 4.33 percent, from 4.23 percent the previous week. Interest rates across the board rose last week, including the 5/1 adjustable-rate mortgage, which rose to its highest level since April 2011.
“Treasury yields moved higher on average last week, based on news that both Japanese and European economic growth is strengthening, along with concern that China may reduce U.S. Treasury holdings in the near future,” explains Joel Kan, an MBA economist. “Despite the increase in rates, applications increased both for purchase and refinance. These increases were partly due to an upswing following the holiday season lull and potentially more borrowers trying to refinance before mortgage rates increase further.”